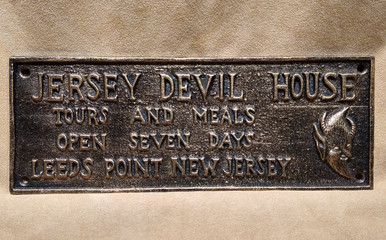 Add a touch of history to your decor with this Cast Iron Jersey Devil House wall plaque!

* A neat piece of travel memorabilia, this plaque makes a unique gift with local flavor for a man cave or bar. Would be a scary and creepy addition to Halloween horror decor.

* This new reproduction will weather naturally if outside or, to retain original finish, simply spray with a protective clear-coat before exposing to the elements.

*Leeds Point, a small community in the Pine Barrens of New Jersey, is said to be the birthplace of the Jersey or Leeds Devil. Legend has it that a terrifying mythical beast has been living within the Pine Barrens for hundreds of years, ever since a woman there cursed her 13th child. That woman was named Deborah Smith, who emigrated from England in the early 1700s, and was married to Mr. Leeds. He was a drunkard and provided little support for his wife and their 12 children. When Mrs. Leeds found herself pregnant for the 13th time, she looked to the sky and cried "Let this one be a devil!" When she went into labor on a stormy night in 1735, she ended up giving birth to a healthy baby boy. But within minutes, the baby boy began to transform. Horns sprouted from his head as his body began to grow, talons sprouted from his hands, and leathery wings from his back. The creature's eyes glowed red as it turned on its own mother, killing Mrs. Leeds along with much of the Leeds family. The devil flew out the chimney and was soon out of sight, but thousands of sightings have been reported since that day.